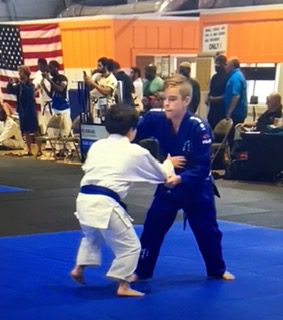 On August 6, 2022, my sister, Lydia Claire, and I went to Atlanta for the National Judo Tournament. I was feeling nervous that I was going against some of the best contenders in the country. There were national champions and an Olympic winner competing. I was worried, too, mostly because I thought I was going to hurt myself. A rational part of me said that if I did my falls right and did my best, I’d be fine. The rational part of me is often wrong.

My instructor, Aubrey Fitzloff, was there when we arrived to the tournament. My parents came to watch me and my sister. A word about my sister; she is two years younger than I am and better at Judo than I am. She was nervous, too. Sensei Aubrey talked to us for a little bit before the tournament began. Some of the people at the tournament were going to do demonstrations before it began, and it was interesting to watch. Then the first two matches started.

The tournament was arranged and organized by age and weight class. My dad put me in two divisions so I would be able to do at least four matches. I was put with people taller, heavier, older, and generally more experienced than I was. After the weigh-ins, we had some time before the tournament, so I read until the tournament started. My sister had the first match in the girl’s division. She did great! She won three matches and lost two. I, on the other hand, lost all four of my matches. To be fair, I was up against 13 and 14 year-olds, and I’m only 11. I still lost.

The tournament was still really fun. I got a bronze medal in the boys 13-14 under 56 kilograms. Lydia Claire won first and second in her two divisions. I was disappointed that I didn’t win one match, but I was still happy that I got third. My dad, my sister and I went and grabbed lunch before the medal ceremonies, but they started just as we got the food. We lead-footed it back, and missed Lydia Claire’s medal ceremony. We still got the medals, though.

All in all, the National Tournament of 2022 was really fun. I got to go to a city that I love and I got to participate in a tournament and test my skills against people from around the country. I think that I will participate in the next tournament, if given the chance.