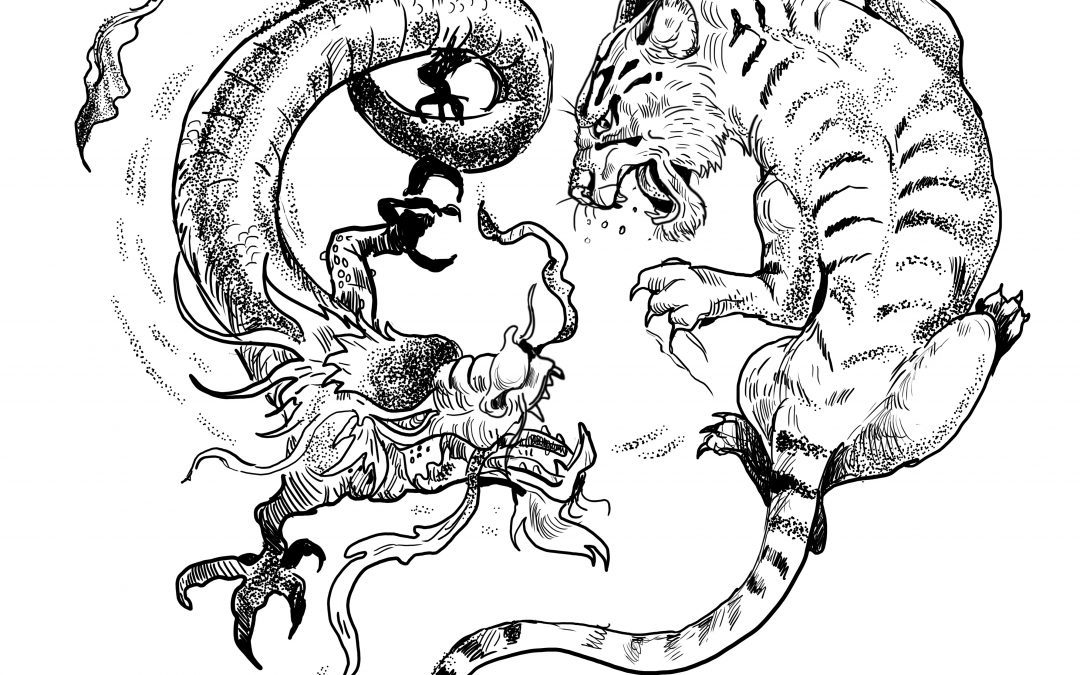 The longer you spend time training DZR the more you’ll come to understand the importance of concepts. Concepts serve several purposes simultaneously: they simplify movements for students, they help us to memorize techniques by creating internal associations, and can even change the energy seen and felt in the technique itself. The way a technique looks, the way it feels, and the result from it all begins in the mind and the particular chosen mindset employed for the occasion is often the result of a concept the practitioner had previously learned and embraced. Naturally a geek like me finds the concept of a concept to be fascinating. The particular concept on my mind at the moment is the “Dragon and Tiger.”

The Dragon/Tiger concept is explored deeply in the later lists but is hinted at earlier on in the jujitsuka’s journey. For a thorough explanation, ask your Sensei or Professor about it. For a bit of context, however, the rough idea is this: the Dragon and Tiger are equally skilled, equally dangerous opponents locked in a struggle. The Tiger is fierce, powerful and explosive while the Dragon is flexible, intelligent and patient. The Tiger generally embodies initiative, hoping to end the fight decisively. The Dragon is a master of timing and thus utilizes swift, tricky counter attacks that take advantage of the forward nature of its opponent. Sound familiar? That’s because many of our techniques fit that description. Take the Kihon for example, at first glance it is essentially a checklist for becoming a Dragon. While there are some techniques often seen completed with the spirit of a Tiger, I believe them to be the exception rather than the rule. If our goal as teachers is to cultivate Dragons, that’s evidence pointing in the direction that being a Dragon is the way to go. Why then do we consider Tigers an “equally skilled” opponent? My initial guess: because it is wise to have respect for the power/skill of an opponent in order to face it with a resolute spirit.

Professor Geoff Lane introduced this concept to me during the AJJF convention in which I received my Nidan. I was given some great food for thought, enough to think about for years. During that discussion it became quickly apparent to me where I needed work, which simultaneously felt exciting and discouraging. Luckily, we have all been trained well in facing adversity. I’m not sure how the rest of you all build self-confidence, but my process involves looking at something from all angles to better understand it. Once I understand something, there’s no reason to fear it. After some pondering, however, it was clear that I didn’t really understand Tigers so I went looking for some to learn about the other side of the coin. All things in balance right? This search took me to Thailand, a country full of tough martial artists who strive to resemble the fierce striped cats. After living and training with the Thais for some time – after endless rounds of bag work, conditioning, sparring, clinching, skipping rope – I’ve learned a bit I’d like to share with you. This information is pulled from experience with modern fighters, retired champions with their unique flavors of a classic style, and Pra Jao Seua “Tiger King” (no kidding) Muay Boran or “Ancient Boxing.”

There are many things I learned from the Tigers that now benefit me as a Dragon. While some of these may be obvious, some may be new so hopefully I provide some good food for thought.

My suggestion? Start with these three:

As jujitsuka in this great Ohana we are representatives of the AJJF and of DZR as a whole. Naturally, we should strive to be the best versions of ourselves possible. Hopefully I’ve provided a tool that can help in that mission.

P.S. On a fun side note, you may also be interested to learn that you already know some Muay Boran, you just may not be aware of it yet. Check out this video for a glimpse of how similar our DZR techniques are to those I learned from the Thais nearly 8000 miles away.