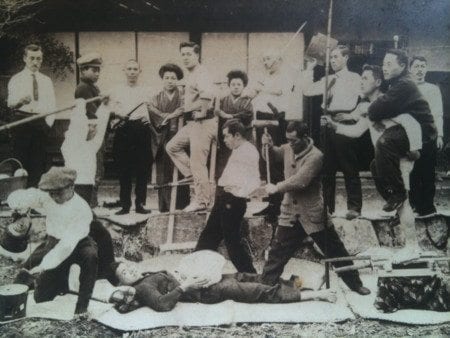 A few years ago, Professor George Arrington was able to get the correct translation of a banner in the backdrop of an old photo of Professor Henry Seishiro Okazaki. Okazaki was demonstrating a technique using a tatami needle pierced through his arm to hold a heavy object. The banner described ‘The Ema method of mind body forging”. From that we know that Okazaki studied a specific mind-body building system.  Arrington has described his investigations and the basic practices of the Ema method in a series of articles including one in this publication[ 1].  There is a convincing case that the source of several entries in our Kiai no Maki list comes from Okazaki’s study of the Ema method of mind body forging and other similar systems. We all spend phenomenal time studying jujitsu and healing arts.  These are arts that Okazaki learned and then taught in the Kodenkan as Dan Zan Ryu Jujitsu. So it is exciting to find a source of knowledge that Okazaki used in his own development.  It presents the opportunity that we could go to that source to study and become better jujitsu students, and that we could study with the teacher’s teachers.

After Arrington’s article was published I had an opportunity to tour Japan with my friends and business partners. On such a trip I usually try to find some special martial arts experience for myself. For this trip I chose to visit some old friends near Tokyo and to find an expert on the Ema method. To prepare for my search I assembled what information we had at the time.  This included Japanese language articles on the system and it’s founder, Ema Shunichi, 江間式心. I found these by searching on the Japanese characters and using Google translate to read the Japanese language results.  I made a copy of a book from the 1920 volume “Ema System Mind-Body Forging Method “, 江間式心身鍛錬法, that Arrington found on the Ema method. I also asked for assistance from T. Hyodo who is an Aikido 4’th Dan living in Tokyo. Over the years Hyodo has shared other martial arts adventures with me. So with this preparation we went to Japan with the hope of meeting Japanese who were able to read the book and articles and tell me something about the Ema method.  The grand prize would be to find some group who actually did the practice and get live instruction.

Our first stop was Kyoto where we stayed for 12 days. It was our hub for other activities and we were at the same hotel for the whole time. Once we were settled in I approached the young lady at the service desk with my Japanese materials and asked for help in locating someone who might have a deeper understanding of the system. She was very interested to help me research this “very Japanese “ subject.  It was more engaging than her usual routine of scheduling temple tours and making restaurant reservations.

Every morning our group would go out to see the sights and when we returned we would receive a report of progress in searching for anyone who might know of the Ema method. Our concierge called universities, martial arts organizations and dojos, and cultural centers, but with no luck. Some had heard of the Ema method but no one knew of anyone who currently practiced it or had seen the techniques practiced. The Kyoto Budokai even had Ema’s book in their library. By the way our helpful concierge had difficulty reading the book.  She complained “it has so many old kanji”.

I also visited the budokai. It has a beautiful old wood dojo and next to it a modern brick gymnasium. At the Budokai I was not allowed to speak to the higher people that my Japanese concierge was able to reach by phone.  In fact I was stopped at the door and invited back to view public practice at a later time. My plan to have native Japanese help me got me much farther in the door than asking for myself for this very Japanese subject.  Never-the-less neither my enthusiastic young concierge nor I found an expert or anyone directly familiar with the Ema method while I was in Kyoto.

In Tokyo I enlisted my friend and colleague Toshio Hyodo . Dr Hyodo understood my request and was even able to present me with a copy of the book when we met.  Toshio Hyodo is an old professional friend and a Yondan in Aikido.  He understood the significance of the search and was in position to help me. So I was really excited when he asked me to take the train out to Tsukuba to meet an academic who was knowlegible in martial arts. Maybe this interview would be the gate to meeting current Ema method practioners and learning about that system.

Toshio did not say who we were meeting and so I was completely surprised when I was introduced to Kiyoshi Kamura. He was not some historian of martial arts. Kamura is the author of Transparent Power and a 10’th Dan in Daito Ryu Aikibujitsu. His book is a Japanese best seller and is now available in English. Transparent Power describes the teaching and philosophy of his sensei, Yokoyoshi Sagawa.  Sagawa is considered by many Japanese to have understood aiki better than any other martial artist of his generation. Sagawa was the prime student of Sokaku Takeda and soke or inheritor of the Daito Ryu Aikibujitsu System.  This interview was one of the special martial arts moments in my life and I will describe the details in a separate article later.  We talked about many esoteric things and he gave me personal physical demonstrations, but we did not discuss the Ema method.

Once I had returned to California I continued one last time. Ema Shunichi was married to a famous actor and his children and grandchildren were Japanese show business stars.  His grandson is Kayama Yuzo.  Kayama is a Rock and Roll star and still very famous in Japan.  He is still alive but no longer performs regularly.  He may sometimes appear at a museum that showcases his songs and costumes located in Nishi Izu Provance.  I was unable to find a direct contact address but I did write both his publisher and his fan club. Unfortunately there was no response.

From my results it appears that the active study of the Ema method of mind body forging in Japan has ended and even the stories have drifted into history.  The Ema method is a very Japanese activity and most of the references were found by searching in Japanese.  But even my Japanese friends could not find any current practice or expertise. While I gave this search my best shot there may still be some Japanese who are carrying on the Ema method. But if they exist they are making no effort to be recognized in Japan or elsewhere.  It seems that the largest group practicing any of the Ema method techniques today is Dan Zan Ryu jujitsu.  Todays Ema method experts are the people with expertise who are your workout partners on the mat when you are doing certain Kiai no Maki arts. So the search for an Ema method student ends every morning when you look in the mirror.