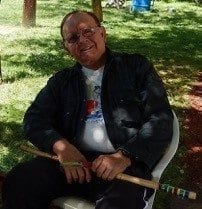 It was, I think, 1998. I had hauled a pile of fencing equipment up to Camp North in Ft. Jones, Calif., and was teaching an intro fencing class. Someone ran up to me and told me that there was a person I needed to meet; he did something kind of like the sword work I was teaching. That person was Joe Bueno and almost immediately we started talking about the connections between fencing and arnis: Spanish explorers took many concepts from the Philippine martial arts. As a result, the Spanish for many years were the most feared swordsmen in Europe — there’s a reason The Princess Bride’s Inigo Montoya was a Spaniard. Most of what I remember from that camp was spending hours discussing with him how fencing and arnis teach blade work, footwork, distancing (fencing focuses on long and medium, arnis on medium and short), and the difficulties involved in getting people to move their feet.

Over the next two years, I went to several seminars where Joe was teaching. I also recall camping out with several other students in his back yard for a weekend of intense stick and empty hand training. Joe was always interesting, always funny, and always encouraging.

Many instructors make the technique look easy when they do it. He made it feel easy when I did it. Then my daughter was born, and suddenly going off for a weekend of martial arts training became less frequent and considerably more dangerous to my health. Three years later, I moved back east and only ran into Joe on those rare occasions when he was teaching at Convention. The last time I saw Joe was at convention in 2014.

Unfortunately, I was teaching at the same time as he was, so we only had time to chat for a few minutes. I only caught a few glimpses of his class, on the next mat; he moved as he always had: calmly and fluidly. He didn’t look like someone who was (as he proudly told me) nearing 90 years old.

I can’t say that I learned arnis from Joe; I didn’t train with him enough to make that claim. What I learned was a different perspective on Danzan Ryu. I learned a way of moving and thinking about jujitsu that has influenced my arts to this day.

It’s often said that we stand on the shoulders of giants. Thank you, Joe, for the opportunity, however brief, to stand on your shoulders.