“Charlotte Elizabeth ‘Betty’ Fisher, wife of past AJJF Senior Professor Lamar Fisher, was buried in Chico, CA along side her beloved. I, of course, knew her because she was a loyal and active supporter of both  her husband and the AJJF. But I met her first as a Paradise Piranha swimmer where her generosity of spirit first manifested. She trained my Mama and Papa in all things swim meet judging, timing, and organizing. My Papa [Sensei Fred Fuchs] was the president of our swim team organization for a while, and the Fishers were President of the NVAL (North Valley Aquatic League).

We saw Betty (and Lamar) up and down the North State as they attended swim meets with their boys who were Chico Aqua Jets. She attended every AJJF Convention with Prof. Fisher, and could be seen at some point at every Brown Belt Weekend as well. But to me, she was a stable and compassionate presence–always seeking me out for a hug, always concerned about my parents, always supportive of my growth as a swimmer, a jujitsuka, and ultimately as a human being. As was true with my own Mama (born the same year as Betty, 1932) I learned a lot about this talented and creative lady AFTER she passed away. 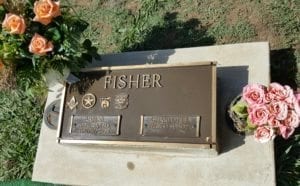 I learned that Betty was a California State Fair floral arranging prize winner (a regular winner at both the state and local level). She was a beauty queen with multiple pageant crowns. There is so much more to tell, actually, but like many women of their Era, those of us around her just didn’t know! What I did know was that she cared about me personally. She will be sorely missed.

The AJJF was represented at her service by Prof. Jane Carr, Prof. Sheryl Hager, and myself. Much Thanks to Harry Burleson for getting the information out to me so that I could attend. It meant a lot.” –respectfully submitted with love and gratitude to the Fishers, Delina Fuchs.