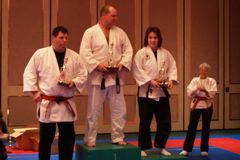 I was asked if I would like to write something in remembrance of Professor Carr. I knew I did, although I was afraid it would drag on and get confusing. How do I tell nearly forty years of stories and not get off track? I decided to focus on one concept at and time, then I can tell several stories.

One story is how Professor made me enter a freestyle contest at Convention. Many years ago the conventions would take a break for lunch. During this break is when the contests were held so people could watch and enjoy the contest while getting something to eat. It just so happened, when I came up to the door with food in hand Professor Carr happened to be standing there. She asked me if I had signed up for the Freestyle contest and I said no, I was going to eat lunch and watch. She said go sign up; I tossed my food in the garbage and went up to the Chair of Clinics and Contest. I told this person I needed to sign up, and as expected I was told it was too late. I said “that is okay, I only asked because Professor Carr told me to sign up.” With that comment the person in charge dug out the forms then said “here hurry and fill this out.”

I had a great time and was glad Prof. made me enter.

I often wonder, do new students understand why we participate in contest and tournaments? I also wonder if the senior students and Sensei remember why they did them as well. I started doing Judo and Kata tournaments when I was a new student with Professor Jane Carr as a junior. I was only seven years old and really didn’t think much about why I was doing a contest or tournament. Sensei said “get a partner, we are doing a contest” so you got a partner. If you didn’t get a partner you went in as a single. That was it…Sensei said to do it, so you did it and it was fun.

What I didn’t understand is what I was learning from participating in a contest or tournament. I believe Professor Carr understood that a contest or tournament in itself is about seeing how well your training is proceeding, seeing what you could improve on, and building friendships along the way. How do we learn to do an art? Professor Carr knew the best way to learn an art is to practice it over and over. How do we prepare for a Kata contest? We take the arts we are given and do them over and over to make them the best we can. Having the chance to work them over and over for two or three weeks can really make a difference in an art.

Professor Carr never explained this to us that I can recall, I know she understood it and saw it as something that was part of your training. To Professor Carr I believe it was not something you chose to do or not. It was something that you needed to do, to become the best martial artist you could be. Some people are more than happy to get up in front of others and perform, most are not. To me this is something Professor Carr understood, it’s one of many important things you get from doing contest or tournaments. People say “I don’t want to do a contest because I am not a competitive person.” Professor Carr never said you need to win this contest. Professor Carr would tell you, “when in a Judo tournament you don’t give up. If you’ve been put in a hold you fight to get out until they stop it.” You never quit, until it is over.

Professor Carr held a tournament in Redding every year for over fifty years. Professor Carr went to other dojos and would judge a contest, and she was one of the professors that was always at the National Convention Contest working as a judge. You don’t do this for fifty plus years just for the fun of it. Professor Carr understood the importance of contest. Since I returned to Jujitsu in the late eighties, I can think of at least six people that were avid contest participants that have become a Professor.