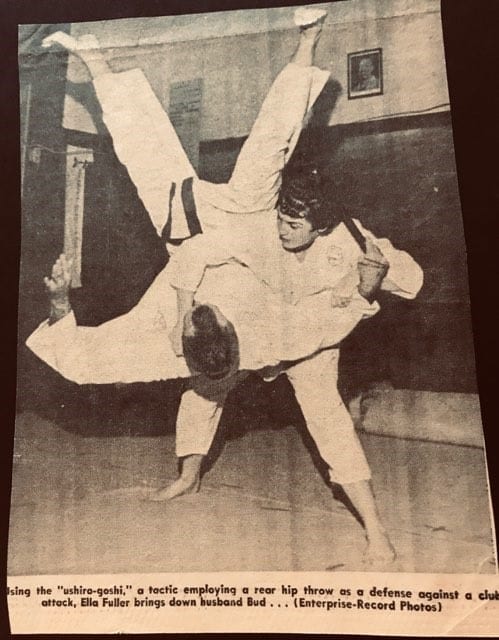 After 61 years of marriage, Professor Bud Fuller (84) and his wife, Ella (77), passed away at their home
in Grants Pass, OR, within 2 weeks of each other. Both were students of Professor Estes in Chico and had
met on the mat at Chico Judo Academy. Their dedication to the AJJF was strong in those years. Ella
began at age 12 with her brother, Norm, and received her Black Belt at age 14. Bud moved to Chico in the
late 50’s from San Francisco. Ella worked her way through the years to Yodan (at the time: Title of Sr
Master). Bud received his Godan and Professorship in 1968. He and Professor Kitty Smith started the
Nibukikan in Chico. Bud also became editor of the Kiai Echo for several years and was Vice President of
the AJJF during that time. Ella taught classes at both dojos and several extended classes.
Bud and Ella lived several years living in the Chico and Red Bluff area with their three children. Bud was
very involved in a Deputy Sheriff position in both towns plus was a gifted radio host at KPAY.
The couple and family moved to Grants Pass in 1972 where they raised their children: Eric Fuller
(Arlington, Washington, DC), Kim Bjorklund (Portland, OR) and Scott Fuller (Phoenix, AZ). During that
time, they concentrated on family and occupations, Bud becoming well known in the area as the voice
of KAJO Radio. He continued as a Deputy Sheriff plus became a teacher for County Jail Prisoners,
helping them get their GED. He became a licensed Paralegal helping people with wills, divorces, and
other legal documents. In 1995, Ella became a devoted student of Social Dancing at a Big Band Dance
Club and enjoyed her weekly classes. They loved living in the Oregon town and were well known
throughout the community.

Professor Fuller and Ella were completely dedicated to the principals espoused in the Esoteric Principals
in Danzan Ryu. Their work and contributions to society were a result of their training. Donations could be
made to the AJJF in their names!