The Koa Kan is Born by Frank Ferris 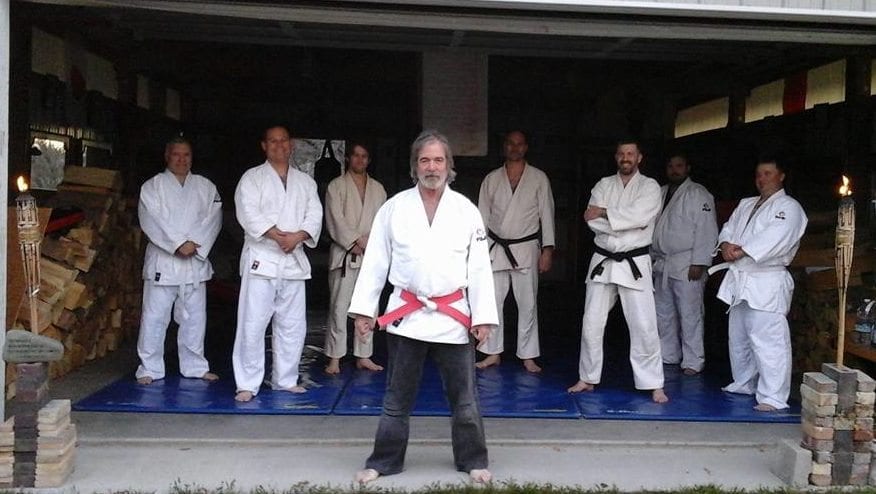 Two years ago I left Reno and moved an hour north into the mountains, bringing my mats, my gear and little else. But like all of us, I had to find a way to continue my training, a dojo was born – The Koa Kan, a School for Warriors, a “Sanctuary” for all.

The Koa Kan is located in Milford, California, a humble shire along interstate 395 in the northeastern part of the state. The Koa Kan sprawls on 10 acres of rolling hills, fields, streams, ponds and forest. The Sanctuary maintains oak, pine, aspen and fruit trees. We are visited by deer, antelope, badgers, wildcats and bears.  The refuge includes gardens, dogs, goats, rabbits and an array of birds and wildlife. This year we have ponds and streams that are teeming with rising ground water, swells, rippling eddy’s and streams. We’re growing and thriving with Zen-like sweat and toil. It is an enchanting piece of land… and it is peaceful and we work it gleefully.

The Koa Kan dojo sits on a hilltop in the epicenter of the Sanctuary. We call the building Valhalla.

Valhalla rests below tall cliffs, along the Plumas National Forest’s eastern border. The student base comes mainly from the Sierra Army Depot of Herlong, California, where I work along with my wife Cristina, and 1600 Army Civilian Employees. My plan is to get these 1600 employees, their spouses and kids to take notice of the Koa Kan. I have had visitors from Reno, old students. My good friends from Duluth Minnesota, the Kuroinukan/Duluth Judo Club, of Sensei Ward Melenich and Sohn Wehesler, came by and trained on my mat.  They enthralled and captivated my new students with their abilities. That really helped me, and my dojo, to have visiting martial artists.

Then the spirit world heard my cry in the hills and sent Uchi Deshi/Ranch Hands, live-in students. First, there was Allen Richardson, a DZR Nidan from the Kuroinukan, who came out for 6 months, training hard in Shin Yo, mending fences, caring for animals, tracking wildcats and assisting in more ways than I can mention. Thanks Allen. But the universe does its thing and now I have a second set of Uchi Deshi/Ranch Hands. A Muay Thai fighter, Wes Leffler, and MMA Professional, Justin Basemen, who fights for Bellator. These guys bring something different to my eclectic DZR mat. But I rein them in with the gospel of Aloha and hard technique. They are now believers.  The Koa Kan is born.

When Professor Esmailzadeh sent me a warm notice of Kilohana acceptance, he asked me if there was anything I needed. Well, I will tell you Mike, as I develop new friends and new students at the Koa Kan there is one more thing I would like to see happen.  I want to see my old friends here, at the Koa Kan, at our Sanctuary. And this WILL happen someday. It will be under a starry sky. We will be eating well and drinking well-crafted beverages, singing and playing music beside a campfire after a hard workout.

Many years ago, I asked our friend, Professor Sig Kufferath, what he liked the most about his years in the martial arts. And he told me it was the people and friends that he made and loved along the way.