Junanshin as a Training Precept by Gregory Poretz 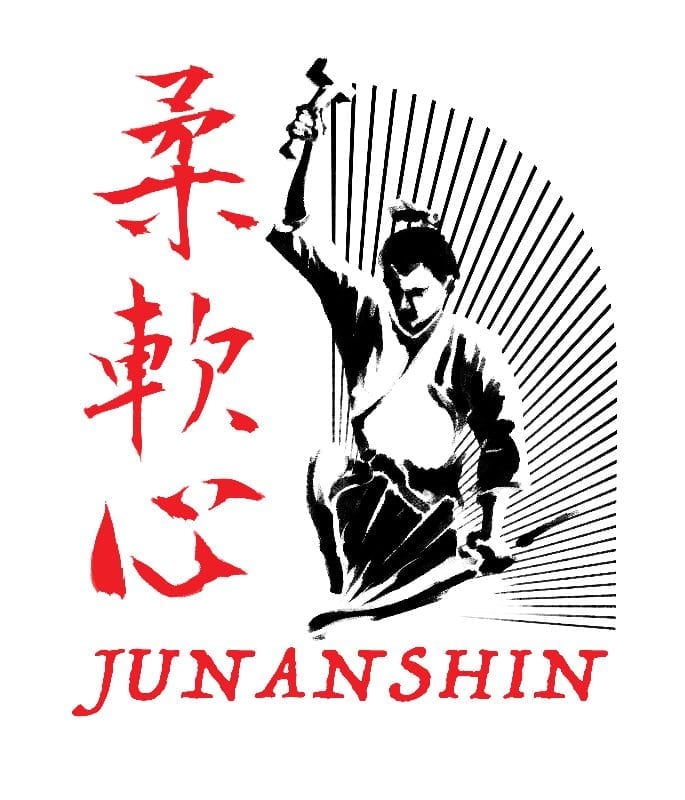 One of the hardest things about simultaneously teaching and learning Danzan Ryu is the demand for flexibility. At exam time I often struggled with “that’s-not-how-I-do-it-itis:” Taking arts I spent decades perfecting only to learn that the Professors want to see version Beta instead of version Alpha. Or even harder, showing my art soft and with control instead of “full bore with wild abandon.”

This brings us to the concept of Junanshin

Keep a flexible, open mind. This requires patience, the ability to set aside your opinions, previous experiences and biases, and a passion to learn. Develop a mental state of allowing – an attitude of no resistance.1

To define Junanshin, A.A.G. Schiebroek uses the term “a malleable mind.”2 According to Webster’s English Dictionary, malleable means: 1: capable of being extended or shaped by beating with a hammer or by the pressure of rollers; 2a: capable of being altered or controlled by outside forces or influences; 2b: having a capacity for adaptive change. Imagine the process of forging a Japanese sword, the metal heated, beaten and cooled repeatedly until the finished product is produced. Ultimately, Junanshin is a state of receptivity, wherein one chooses to trust a source of instruction, accept the lesson, and block out (or at least attempt to do so) everything that is not the lesson.

Application to my study of Bujitsu

Without Junanshin, the study of martial arts would be quite pointless. In my personal journey studying two very different martial arts, Danzan Ryu, a “modern” adaptation of classical jujitsu that has been a major part of my life, and Shinto Muso Ryu, a nearly 400-year-old koryu weapon system, the hardest part is the conscious abandonment of ego/self. To trust the instruction, smile and nod, and do it better, again and again, until the physical, mental and spiritual self are in congruence, is where Junanshin lives. Achieving a flexible, open mind requires patience, the ability to “empty your cup,” and a passion to learn. If Mushin is “no-mind,” then Junanshin is “no-ego.” It is the basic requirement for training. It becomes an imperative mindset for the entry into the advanced arts.

After achieving Nidan in Danzan Ryu I was introduced to Shinto Muso Ryu. My first encounter with the ryu was actually pretty much as expected: a Spartan and serious training regimen with very little room or need for the student’s “input.” The student prepares to practice basic arts in a traditional setting as a total beginner. I understood the need from a safety perspective as we were working with dangerous weapons. Junanshin addresses this issue by demanding the students open their mind while simultaneously shutting out external stimulus except for the tachi (sword) in front of them and the sensei at their side. With progression in the ryu following Nyumon (official acceptance into the ryu), the precept of Junanshin must be immediately and vigorously applied. Training with hard oak weapons is quite a test of the spirit. In my mind, I desire to be as far away from the sword as possible. Yet Sensei says go forward and scoop the jo upward. Honestly, my mind has no desire to do this, but Sensei says go forward and scoop upward and that is what I must do. Whenever my mind hesitated, the training scenario would end with my symbolic disembowelment. When I was able to trust the instruction, the technique was successful.

Junanshin silences the mind when I start to think I know anything about the technique, and allows me to remain patient, trust my teachers, work on my humility, and maintain a supple and open mind.

Compatibility with a modern lifestyle

In the modern world one might notice a dearth of Junanshin. Imagine this scenario: several junior and senior yudansha (black belts) attend a seminar. A senior instructor gives a long speech about keeping an open mind and demonstrates an art. The first words uttered, before uke even gets up from the mat, are, “That’s not the way I learned it.” Behold the absolute counter to Junanshin. Is Junanshin incompatible with a modern lifestyle? Or is a modern lifestyle in fact compatible with Junanshin? Soldiers in training are a great example of Junanshin, but this is achieved only after several weeks of breaking down the ego, stripping away the external self and leaving the soldier in a perfect state for the beginner’s mind.

Budoka in koryu systems are taught Junanshin from the first lesson. Alternatively, Western school children are taught to express themselves and question their learning, even question authority.

Junanshin is a two-way street

I recall a time when as a green belt I observed an adult student on the mat trying to solve the mystery of taking a good ukemi (fall). He was having a hard time getting it just right and was hyper focused on having correct form. His posture was good, his intent was on point, but because he was concentrating so hard on the physical he was neglecting to kiai. For every attempt the student made at his fall, the sensei would correct him by shouting, “kiai, kiai.” Both the instructor and student were getting more irritated and impatient with each attempt and the scene ended with the sensei yelling, “I told you to kiai!” and the student yelling back, “I am trying to do the fall right first!”

So, upon whom does the obligation to apply Junanshin fall?

I often play this scenario in my head when teaching new concepts to students. To me the answer is both. But the onus falls on sensei to create a space where the student trusts in the instruction. Of course, the student must be willing to accept the lesson.

One must remember we are not in Japan. The concepts we as instructors use daily may not filter well through our decidedly American gestalt. Therefore, it falls on us not only to define these terms for our students but to exhibit them as much as possible.

As a student, I need to trust, but keep my eyes open to the dangers of abuse—awareness that a total unquestioning nature is usually the sign of a potentially toxic environment that should be avoided. The history of martial arts is littered with many unscrupulous types who have misused these concepts to take advantage of unwitting followers. Conversely, a dojo without the discipline that comes from Junanshin, is truly no dojo at all.

As a sensei, Junanshin is of utmost importance. I need to encourage my students to perform the kata as instructed, to trust the training, to be patient and accept that their abilities will increase in time. At the same time, I need to transmit the kata as I was instructed and trust my own training.

Guiding students to quiet the mind and practice with a good spirit also requires a little Junanshin. I must try to accept that each student is coming from a different place and may face different challenges learning the art. I endeavor to trust in my abilities and transmit what was taught to me as clearly as possible.

Junanshin is more than a training mindset; it is a choice one makes. Junanshin is a magnifying glass we hold over the roadmap we are using. It allows us to follow directions when we are not sure of the path. Using Junanshin we can choose to trust the mapmaker and still allow ourselves the joy of exploring the terrain.

As the co-hosts of the upcoming 69th Annual National Convention, Sensei Robert Rainey and I pondered themes for convention and found ourselves at once excited and concerned with how to get it right. As we began to plan the convention experience we wanted participants to have, it became increasingly apparent that we must study past conventions, speak to those who hosted before us and at the same time approach convention with fresh eyes. With all the great theme suggestions, Junanshin easily seemed most fitting for our convention.

So, to our comrades in budo, I challenge you to all empty your cups, free yourselves from all preconceptions and join us in Ontario, California on April 28-30, 2017 for a continuation of the AJJF’s annual mission of

gathering hearts, minds and bodies together for the purpose of perfection of character.