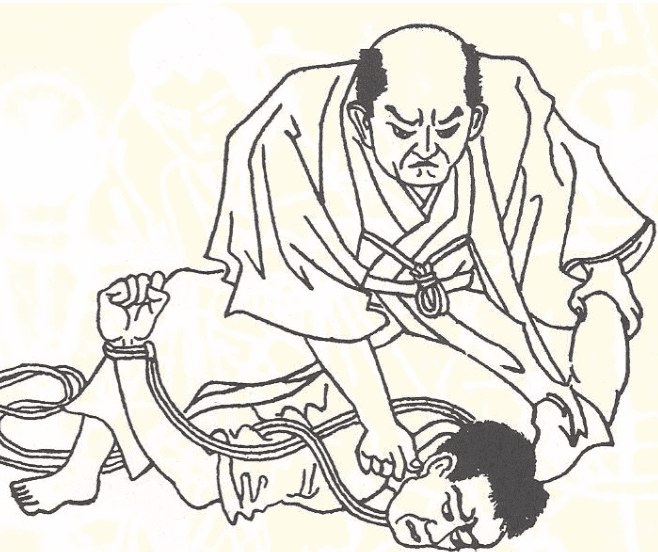 Hojojutsu is a traditional style of military incarceration and torture used in feudal Japan by samurai and police.  It is practiced today as a traditional Japanese martial art of restraining a person using cord or rope. Encompassing different materials, techniques and methods from many different schools, Hojojutsu is a Japanese art that is a unique product of Japanese history, resources and culture.

My interest in hojojutsu began about ten years ago.  I was drawn to how well the principles of this art matched my own practice of jujitsu and iaido.  The techniques are simple, clean, and efficient – qualities I seek in my martial arts practice.  I was also intrigued by its history and relationship to Japanese culture. Lastly, I was inspired to teach hojojutsu because so few others do.  It is a martial art that should not be lost.

As a martial art practiced today, hojojutsu is seldom taught on its own. It is usually incorporated into the curriculum of a larger school of bugei or budo; and frequently as an advanced study in jujitsu or iaido. This lack of separation has led to a scarcity of this art in the general martial arts community and a shortage of qualified hojojutsu instructors. My love of hojojutsu as well as my desire to be a part of preventing its extinction has been a large part of my inspiration to share this beautiful art with others. To achieve this goal, I have developed a clear hojojutsu curriculum that can be taught as a martial art on its own. It is derived from multiple martial systems  and organized into a practical teaching method.

The history of hojojutsu is varied and obscure. Japanese cultural history has complex and pervasive traditions of wrapping and tying in everyday life, e.g. Japanese traditional clothing which is tied to the body instead of being held with the buttons, pins and fasteners. Japanese culture is also deep in the aesthetic beauty of wrapping- therefore Hojojutsu ties must be beautiful as well as functional.

Hojojutsu was created for the capture, transport, restraint, and torture of prisoners. It was used beginning in the 17th Century Edo period and remained in practice by Japanese police and military until the WWII era. Different restraints were used based on the person’s social status or method of transport. Torture with rope was also practiced, with the use of restrictive ties, forced kneeling on tatami mats, and partial and full suspensions.

Generally speaking, hojojutsu can be divided into two broad categories. The first is Hayanawa- capture or fast ropes which are short, efficient and dangerous capture ties. The second is Honnawa- or main ropes, which are more complicated, sustainable, and meant for transport or long term security.

Hojojutsu requires an understanding of human anatomy that matches well with the practice of jujitsu. Rope techniques include leverage control, or the typing of limbs in positions that weaken them. Precise rope placement can discourage struggling by restricting blood flow, air flow, qi movement, and impact nerves- singly or in combination.  It is important to be mindful that hojojutsu is extremely dangerous and students interested in this art should seek study with a qualified instructor.

As with many martial arts, hojojutsu has its own protocol and manners. Although not much thought given to human rights, binding a person was considered a grave matter not to be done lightly, due to the associated humiliation.  The shame of having a rope around one’s neck and knots on the body was a huge disgrace. Ropes around the neck and knots were often used purposefully to embarrass a prisoner by a captor of higher rank; or avoided to show respect to the prisoner. If the proper form of restraining suspects was not followed, the person who applied the restraints could be punished.

The material used to create the rope was related directly to the raw materials available. Hemp was twisted in various widths and lengths depending on the type of tie. Hayanawa typically used shorter and thinner ropes. Honnawa,  due to the complexity of  ties and sustainability required, were longer and thicker.

Hojojutsu complements the techniques of jujitsu but also relies on them.  The rope ties cannot be performed by themselves without first understanding basic capture and control from a martial art such as jujitsu which includes these types of techniques  The prisoner must be taken down, under control, and unable to fight prior to the start of the tie.  Additionally, control of the prisoner must be maintained while applying the tie.  Techniques such as joint locks, chokes, leverage, and pressure points may be used for this purpose.

I am inspired to continue my own knowledge and growth in hojojutsu as well as share it with others. I have been honored to have taught this art at many small dojo gatherings, study groups, and at large martial arts conventions and continue to share this obscure yet important part of Samurai history. I thoroughly enjoy sharing hojojutsu with others who appreciate the history and beauty of this art. The website for my Northern California dojo includes information on hojojutsu training as well as a source to purchase authentic hojojutsu rope.