Don’t You Dare Tell Me to Take it Easy

Don’t You Dare Tell Me to Take it Easy 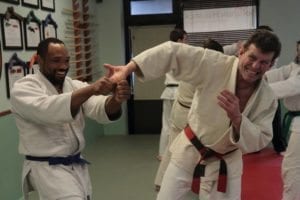 Ward smiling through the pain.

One thing that drives me crazy is when I am at a clinic or camp and an instructor tells the class to “take it easy” for some reason. They usually say that it is a long clinic or camp and we should save ourselves. I usually spend hundreds of dollars and travel hundreds or thousands of miles to get to the event, so if I wanted or needed to “take it easy,” I would stay home and knit some mittens. I am not a martial artist because I like to take it easy. I didn’t get a Godan taking it easy. I don’t have a successful dojo because I took it easy for the last 28 years. I don’t do Judo and wrestle 20 year olds because I am trying to take it easy.

By way of proof for my above rant, I recently had 7 stents put in my cardiac arteries. All 3 arteries were 80-90% obstructed. There is no real recovery time other than I have to be aware of increased bleeding risk due to the blood thinners I am on for the rest of the year. So, I am doing all of DZR, doing judo groundwork and wrestling 20 year olds every week. I am not taking it easy.

So where is the proof for my contention that taking it easy is the wrong way to approach life? The only reason I knew there was something wrong was when I was wrestling or doing judo the hardest, straining to finish another round of randori, driving a double leg on a #200 kid, I would feel like I was suffocating when I stopped. My EKG was fine, I failed a stress test (my blood pressure dropped) and I had two angiograms to put in the stents.

I never felt anything wrong in daily life, while doing regular DZR classes, or even when shoveling snow. It was only when I was doing anything BUT taking it easy that I became aware of my condition. If I hadn’t had the stents put in now, I probably would have had a severe heart attack in the next few years and required bypass surgery. At 56, I probably could not have come back from open heart surgery to compete at the level I do now.

Now when someone tells me that I should “take it easy,” I ask them why they are giving me advice that will kill me! So, let someone else knit the mittens. Don’t take it easy. Don’t settle for good enough. Don’t live part of the way. Sutemi.