Diving Under the Water: The Humiliating Origin of Mizukuguri – by Professor George Arrington 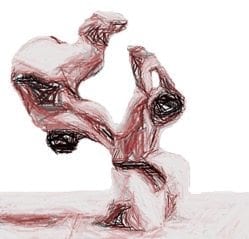 So…you decide to take up the study of some form of self-protection. The question then becomes, “Does what I am learning make sense for its intended purpose?”

If you learn Danzan-Ryu Jujutsu (檀山流柔術), you will probably first learn how to properly and safely fall in the happenstance that someone may trip you, or throw you to the ground. This makes perfect sense because many such encounters end up with someone in that position.

Next, you may learn several methods to extract yourself if you have been grabbed in some manner. Again, this makes perfect sense because many situations that require self-preservation begin by some malfeasant taking hold of you. You may then learn maneuvers for a variety of attacks be they punches, kicks, grabs, etc. These may include throwing your opponent to the ground or applying a painful submission hold that ceases their aggression. During the instruction of these (in most cases), you first learn the rudimentary actions to complete such maneuvers and techniques, and then later, learn their application(s) and purpose. This allows the student to imprint the movements before tackling the deeper question of “why”?

But, of course, human curiosity strives to answer that all-consuming previous question. In most cases, the answer is all too apparent: The attacker does A and you do B. Simple. Straightforward. Effective. The student’s curiosity is satisfied. (Sometimes, they discover alternate methods or even new applications for the same technique.) But occasionally, a technique in the curriculum appears to deviate from a common-sense explanation.

One such technique comes from the fourth course of Danzan-Ryu Jujutsu known as Oku no Te (奥の手), and the technique is called Mizukuguri (水潜り). The translation of this term refers to “submerging under the water”. Traditionally, this technique is taught to the student as a response to a double ear-slap. When an opponent does this, the defender blocks the slap, drops down to their knee, sticks their head between the attacker’s legs and throws him backwards. This technique is illustrated in a sequence from an old, 1943 film shown below:

This sequence comes from the video “Danzan Ryu Jujutsu”, first released in 1988 by Bernie Lau. It depicts a group of Juan Gomez’ students (including a young Wally Jay from whom the film originated) demonstrating most of the techniques in the system. It was filmed in the backyard of Danzan-Ryu founder, Professor Henry S. Okazaki.

After the student learns this technique, they frequently question the rationale of sticking their head between the opponent’s legs. In fact, many may consider it foolhardy to do such a reckless action. Faced with such a natural inquiry, the teacher may give an explanation akin to: “Such a maneuver is completely unexpected, and the opponent will be caught off-guard.” They may also reply: “This technique teaches some form of body mechanics and/or how to enter into close range of an attack.” To some, these may be satisfactory and fulfilling responses. Others, however, may continue to view this ducking between the opponent’s legs as extraordinarily risky and thus, prefer alternate defenses. In fact, I am aware of at least one noteworthy, top-level instructor who changed his teaching and modified Mizukuguri to a different throw.

So, the question of this technique’s true origin and meaning remains.

In the practice of research, one often strives to find the answer to a particular problem. There are sometime successes and there are sometimes failures. This is the nature of research. Sometimes, however, an answer appears that satisfies some unasked, or long-forgotten question.

This latter scenario was the recent case for me concerning the origin of Mizukuguri.

I recently received a reprint of an old Jujutsu book from my friend, Master Terry Ham of Pasadena Martial Arts in Pasadena, TX. The book entitled Bokuden Ryu Jujutsu was first published in 1916 by Otsuka Nobuyoshi and republished in 2016 along with an excellent set of translations by Eric Shahan. It is available through Amazon.

The book contains line drawings of Jujutsu techniques along with detailed descriptions written in Japanese. Many of the techniques are familiar to most martial artists, but there are some unique ones that may only be recognized by Danzan-Ryu practitioners.

A curious inclusion in this set of Jujutsu techniques was one called:

Note the obvious comparison with a frame from the 1943 film:

A casual observer would see a striking similarity in these two techniques. (Although there are some minor differences in the entry and kneeling position, these two are one and the same art.) So then, why is there a difference in the names of these? Herein lies a fascinating story from ancient China!

In Danzan-Ryu Jujutsu, we usually explain the name Mizukuguri because the Tori is ducking under the opponent’s “water” in a manner akin to diving into a breaking ocean wave. But what is this “Kanshin Mata” all about?

In his translation of the Japanese description of this technique, Eric Shahan calls it “Humiliating Thigh Throw”! He further adds that Kanshin (韓信) was the name of a successful Chinese general who had an unusual incident as a youth that nearly cost him his reputation and possibly his life. Shahan also says that this technique is technically known as “Kanshin’s crotch throw”.

To further research this, I found that the Chinese name for this person is Han Xin [p. han hsin] (d. 196 BC). Han was one of the “three heroes of the Han dynasty”. He is noted for commanding several key victories during his lifetime, but our story focuses around two incidences from his youth.

He grew up in the Chinese village of Huai Yin (淮陰). As a boy, Han’s parents died and left him destitute. At one point, he was so desperate that he begged for food from an old woman. She fed him and thus saved his life. Grateful for her kindness to him, Han pledged to one day return and repay her.

During his youth, Han was keenly interested in military theory and dreamed of being a warrior. He would train himself with weapons, such as the sword. One day while wearing a sword, he encountered a “hooligan” who challenged Han by saying:

“Although you are tall and large and like to wear knives and swords, you are cowardly inside.”

He then humiliated Han in public by saying:

Han realized that killing this man would make him a criminal and thereby destroy his future reputation and ambitions. Han looked at him closely, bent down, and crawled through his legs. Everyone in the market laughed at Han and considered him a coward.

The incident is depicted in the Japanese ukio-e tryptich seen below: 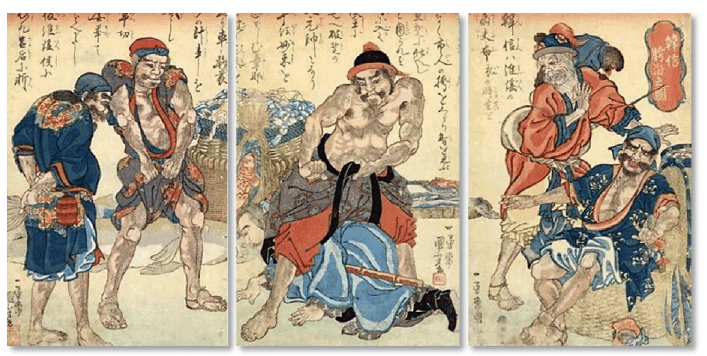 Despite this early failure, Han went on to become a general in the army an achieve great successes on the battlefield. He also became the king of the Chinese states of Chu (楚) and Qi (齊).

After all of this, he returned to his hometown to fulfill his promise to repay the woman who had fed him. He rewarded her with 1000 taels of gold (about 1200 ounces).

He also found the hooligan who had humiliated him in public. Instead of exacting revenge on him, Han appointed him to the position of zhongwei (中尉) or lieutenant, declaring:

“This man is a hero! Do you think I could not have killed him when he humiliated me? I would not become famous even if I killed him then. Hence, I endured the humiliation to preserve my life for making great achievements in future.”

Today, there is even an idiom in Chinese that describes any humiliating incident: 胯下之辱, Kuà xià zhī rǔ (lit. “crotch of shame”) – The shame of crawling under someone’s legs.

The importance of understanding the origins behind one’s art cannot be understated. While we excel in the performance of our technical skill, it is also necessary to grasp the deeper meanings therein. Remember the pen and the sword.

About the author: Prof. George Arrington, Hanshi, is a master instructor in all aspects of Danzan-Ryu Jujutsu. He began his study of Danzan-Ryu Jujutsu in 1970 under Prof. Michael Belzer and earned his black belt under the auspices of the AJJF in 1974. He graduated from the Kodenkan Jujitsu Okugi™ in 1993 and was an assistant instructor in that class in 2003 and 2013. He is the author of seven Jujutsu-related books, the producer of the film, “Jujutsu Shoden” and is the editor of The Danzan-Ryu Jujutsu Homepage (www.danzan.com). He is also a teacher of mathematics and physics.

Editor’s Note: This article was previously published at www.danzan.com and republished here by author permission.