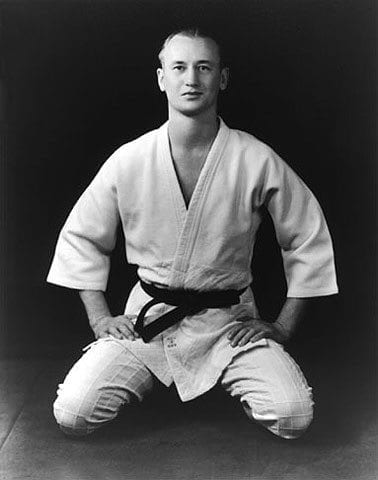 Richard (Dick) Peter Rickerts was born in Petaluma, California, on July 18, 1906.  He joined the Coast Guard and was stationed in Hawaii where, in 1929, he met and began to study with Master Okazaki.  At the Kodenkan, class members were assigned to a senior student who was responsible for the daily teaching of the arts.  As he came up though the ranks, Dick became one of Master Okazaki’s principal teachers.  Bud Estes, Ray Law (later co-founders of the AJJF), were assigned to Dick for their training. 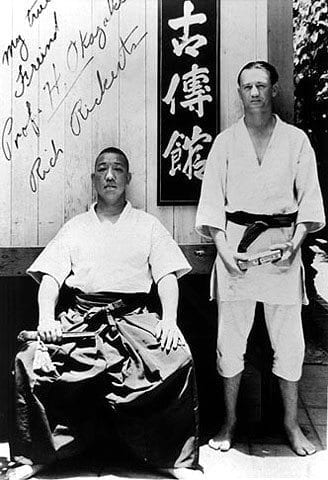 jujitsu to servicemen and civilians at the Army & Navy YMCA after the original instructor, H.E. McLean, died in 1937.  Attendance was so great at these classes that the Army & Navy YMCA formally dedicated its auxiliary gymnasium to the study of jujitsu in 1941.  Dick was the head instructor throughout this period, and Master Okazaki made frequent visits to insure authenticity of form.

In the Spring of 1941, Dick took an extended vacation and came to the mainland to teach at Laws American Judo & Jujitsu Academy in Oakland, California.  It was here that he met his future wife, Helen, who was a student at Laws’ school.  They were soon married and they traveled back to Hawaii to live.

Perhaps sensing danger in the air, they left Honolulu the evening of December 6, 1941 (eve of Pearl Harbor invasion), and traveled to the San Francisco Bay area.  They soon moved to San Mateo where he obtained employment as a pipe fitter for submarines.

During this time, Dick started a school in San Mateo.  He also taught judo and jujitsu at the San Mateo YMCA.  Instrumental in forming the Northern California Judo Federation and its successor the American Judo & Jujitsu Federation, Dick was made a founding Professor in 1949.  For her contribution, Helen was made an honorary black belt.

Professor Rickerts retired from teaching in the 1940’s due to employment demands.  He died March 6, 1990.