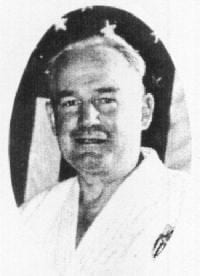 Ray and Marie Law touched the hearts and minds of many thousands of people in the 30 years they actively taught Kodenkan Danzan Ryu Jujitsu in Oakland, California. I, along with Professors Congistre and Rebmann, who were also students of the Laws, feel a deep sense of gratitude and love for these two pioneers of American Jujitsu, as well as a commitment to continue their life’s work. This is their story.

Ray law was a first-class publicity man who could easily be ranked Judan in business and marketing. he began his career as Humpty Dumpty the Health Clown in 1927, when he broadcasted health massages over the radio in both Salt Lake City and San Jose. Also during this time, he was a staff lecturer for the California Dairy Council, presenting his health education programs in schools, fairs, and clubs throughout California. Marie Law, who was originally from Alabama, assisted him in these programs with animal imitations, at which she was adept.

Professor Law once told me how he and his wife caused an auto accident while driving to a school to deliver a health lecture. They had just given a presentation at another school, and were dressed up in their clown outfits. Another driver approaching from the opposite direction was distracted by seeing the two clowns in the car, and he drove right into the median divider.

Ray and Marie’s life entered a new phase about 1937, when they moved to Hawaii with their two small sons. They were inaugurating a series of educational, health and public relations projects for the benefit of the youth of the Islands. Shortly after arriving, they met their new neighbor, Master Henry S. Okazaki and their lives changed forever. They promptly took up the study of Jujitsu and restorative massage with the Master. Before leaving the islands in 1939, Ray had been promoted to Nidan.

Marie often told a story of how Master Okazaki once “abducted” her two sons. One day, he found out that the kids were very sick, and he decided it was his responsibility to heal them. He walked into the Laws’ house unannounced, and into the children’s room, tucked one kid under each arm, and took them home with him. In spite of Marie’s protestations, he wouldn’t let them go home until they were well.

Ray and Marie were inspired by the Master’s dream to see Kodenkan Black Belt instructors in every state in the Union. Upon their return to California in 1939, they were the first of the Master’s students to establish a full-time Jujitsu school on the mainland. Their first classes were held in the garage of their home in Oakland on a one-inch thick mat, which they had purchased from the American Legion for $25. During World War II, Professor Law trained about 500 commandos. From this small beginning, Ray and Marie built up their school until it was to become the largest of its kind in the United States.

During World War II, Professor Law held a job as a night watchman in a warehouse. Late one night, he was making his rounds alone in a huge building. As he began to approach a darkened alcove, he felt the presence of someone hiding there. Law continued ahead in a normal manner. When he passed the corner, the intruder, who was standing on top of an oil drum with a wrench in his hand, took a swing at his head. The Professor redirected the blow, threw the man to the ground, subdued and arrested him. Professor told this story as an illustration of how the skills of inner awareness, which he had learned from Master Okazaki, saved his life.

During the 1940’s, the Laws’ American Judo and Jujitsu School prospered and moved four times to larger quarters, until it found its permanent location in 1945 on Grand Avenue in Oakland. Over the next 24 years, the Laws taught over 14,000 students and awarded 116 black belts. Their greatest joy was in helping young people build strong and healthy bodies, and the character qualities of confidence, self-reliance, and self-esteem.

“When I first joined Law’s dojo in 1957 at the age of 10, I was immediately captivated by the circus-like setup of the gym, and with the Professor’s magnetic and charismatic character. At my first class, there were about 125 kids on the mat, and they were all having an incredibly wonderful time. The students divided into smaller work groups, each led by an older colored belt. The Brown Belt instructor heading my group was John Congistre. He led us through various stations, where we would climb a rope, roll over a dummy, swing from rings suspended from the ceiling, climb a metal pole, kick a cloth pie plate a hand span over our heads, hit a speed bag, or climb a rope net (which the Professor had acquired from a W.W.II Naval vessel). But the thing that impressed me the most was the real skeleton handing in a closet, which the Professor used to teach us anatomy.”

“One of the first lessons I remember the Professor teaching was about the “Four Kings of the Dojo.” He explained that each of the pillars holding up the dojo represented a particular quality all students of Jujitsu should strive to develop. The first pillar represents one’s dedication to the training of the body. The second stands for obedience. The third represents love of the general public. And the fourth stands for the love of country. Professor worked hard to help keep our minds on a high level whenever we were with him, as did Marie.”

“Marie Law was an extraordinary woman. She always had a kind word for everyone, and treated us like her very own family. She had learned the healing arts from Professor Okazaki, and was always there when you needed a strain or ache rubbed out As a child, I remember her behind the front counter after class logging the names of a long line of waiting children onto the “Nickel List,” and handing out nickels to each kid that had come to five classes. Marie would also write inspirational quotes on the blackboard every week. One of my favorites was the “Judo Star.” Each point of the star represented various aspects of one’s inner and outer life that needed to be kept in balance in order to stay healthy. Theses aspects were mind, body, spirit, social, financial, and family.”

Professor Law had a life-long thirst for knowledge that was insatiable. For example, when he got back from his stay in Hawaii, he was very interested in learning more about anatomy, so he audited classes in the subject at the University of California. He maintained an extensive library in his home office, which was in a separate cottage. He also had a special interest in metaphysics and the science of mind. He once conducted an experiment at his home with plants to see whether his feelings about the plants might affect their growth. He raised 20 small plants in cartons in his backyard, and treated them all physically the same throughout the experiment, providing them with the same amount of water, sunshine exposure, and nutrients. However, with 10 of the plants, he consistently gave praise and encouragement every day. The other 10 he gave criticism and negative energy. As the experiment progressed, the former group thrived and grew strong, whereas the latter group were stunted in their growth, and many withered and died. The Professor always gave his students ample praise and encouragement, and we all thrived.

“Professors Ray and Marie Law were like parents to me. They will live forever in my heart as examples of the highest qualities I strive for in my life. I understand now that the greatness they manifested was primarily due to the depth and power of their abiding love for all.”