Born just after the turn of the twentieth century in Hawaii, John K. Cahill was active in sports at a very early age.  Around 1934, when he was 27 years old, John joined Master Okazaki’s classes at the Kodenkan in Honolulu, Hawaii.  Already married for three years to Abbie, and the father of four, John fit his martial training in around his full-time job as a machinist in Pear Harbor.

Around 1938, John was promoted to black belt by Master Okazaki and soon began his own club called Hui Miki Miki which means “lots of pep” in Hawaiian.  John taught judo and jujitsu to American servicemen stationed on the Islands throughout World War II.

In 1947, John and Abbie moved their family to the San Francisco Bay area of California.  He resumed his trade as a machinist and soon opened a school in Daly City, California.  Shortly thereafter, the school was moved to South San Francisco where John taught for nearly fifteen years. 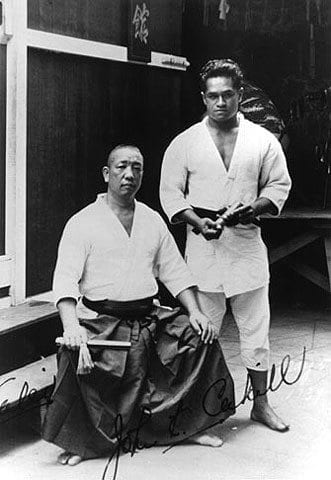 Professor John Cahill taught hundreds of students during his years as a teacher and was also very successful in judo competitions himself.  Many of his students were successful competitors, and his junior program was very popular.

Professor John Cahill died in 1962.  Classes were soon taken over by his son, Willy Cahill.  The location of the school was moved in that year to San Bruno, California where Willy remains Sensei of Cahill’s Judo Academy.  In Retirement since the early sixties, Professor Abbie Cahill died in 1972.